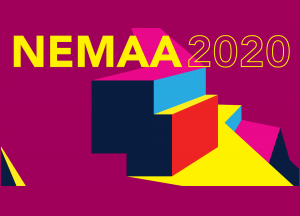 Northeast Minneapolis Arts Association’s new president Brian Burke kicked off his part of NEMAA’s annual meeting on February 25 with a message of accessibility — he said he’s open to talk with anyone interested, email brian@NEMAA.org.

The organization, which produces Art-A-Whirl, not only paid off $75,000 of debt from 2018 in 2019, but now has moved $40,000 into savings. Following the example of prior leaders, according to treasurer Nancy Przymus, NEMAA would like to see about one-third of their $340,000 operation kept in reserve, so there’s a ways to go, but much progress made.

NEMAA had twelve different income streams, the largest of which were membership dues at 24.7% or over $93,000, directory/magazine advertising at 17.7%, in-kind donations at 14.7% and grants at 13.8%. Stakeholders were thanked for their participation.

Executive Director Anna Becker announced partnerships that will add to the engagement of Art-A-Whirl on May 15-16-17, 2020. Fulton Brewing will hold a bike art event, Wet Paint is donating supplies for demonstrations. And the Northeast Minneapolis Lions Club will support the trolleys, which will have an expanded route this year to include the Flux Arts and Holland Arts buildings

Becker also announced that the trolleys will be able to use 22nd Avenue, which in past years had been blocked by a bar-sponsored street party. She explained that NEMAA is working with alcohol purveyors on ways to support the arts.

There were a few questions from the approximately 40 attendees, a couple who asked if NEMAA would (paraphrasing here) address gentrification. Northeast Minneapolis Arts District was recognized for its work in that area. We look forward to working more with NEMAA.

Five Poets at a Local Podium