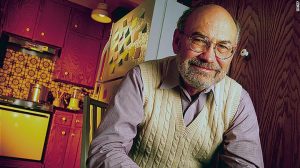 Described in the Casket Arts directory as a retired 3M chemist who has spent the last 30 years painting in acrylics and oils, Spencer Silver’s latest multi-canvas floral and natural works featured ideas about the prairie. When he passed away at age 80 on May 8, we learned (if we didn’t know already) of his fame as the co-inventor of the Post-It Note.

Silver invented the repositionable adhesive many years before colleague Art Fry put it to use bookmarking his choir music. Silver was named in dozens of patents and won many awards.

“Spencer was a Casket Arts early adopter, a tenant in Casket Arts since 2007,” said building owners Jennifer Young and John Kremer. “His kind and generous spirit was a quiet steady presence on the 3rd floor.…Spencer was always willing to strike up interesting conversations, and share innovative ideas for making the building work better. He loved his studio and he will be deeply missed by many of his longtime friends in the building.”

An article on the 3M website describes “Spence” as a mentor to others at the company, a trait in evidence as a member of the Northeast Minneapolis arts community. His work was also exhibited at the Bloomington Center for the Arts and other venues. He also loved to cook and travel.

Give to the Max Day