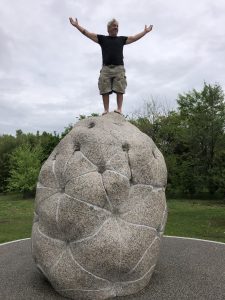 At the new playground beyond Sheridan Memorial Park, you’ll encounter the first actual climbing boulders in the city not made of plastic, and other sculptures by Zoran Mojsilov. Before you get there, visible from the Broadway Bridge or walking to the river end of 13th Avenue, you’ll see Zoran’s outdoor studio. It’s a place where the public is invited to watch him work and a gift by the artist to the community—art enjoyment for those who can not afford to purchase a large sculpture. The space is a rotating gallery of stone, wood and metal art in progress.

Outside Kieran’s Kitchen Northeast and the FOOD Building at 14th and Marshall, new work is underway. Zoran is cutting symbols out of stone representing different cultures in our community. He describes the piece as a curtain between the outside and the inside. Stone tables in the courtyard will contribute to the visitors’ sense of a magical place.

I sat down with Zoran to talk about this new body of work.

Mojsilov moved to the Twin Cities in 1986. He got a job at the Walker Art Center working for the installation crew. He was able to get a studio and won many awards and grants over the years. In 1996, he moved his studio to the Grain Belt Brewery complex and has been there ever since. He states that he was one of the founders of Art-A-Whirl, with David Felker and many other artists whom we have profiled over the years. He said he does not care for the arts festival scene it has become. “Selling trinkets or small art pieces to make a living as an artist is not my gig.” He wants opportunities to make statements. 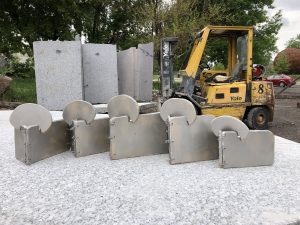 He doesn’t care if he offends you or if you agree with him or not. He knows who he is and knows to survive as an artist. “You can not spend your time waiting for praise and for others to give you more opportunities. You have to look out for yourself because no one else will.”

Observant, generous to those who are honest and real, Zoran also knows a con artist bullshitter when he sees one. He has made his career as an artist by realizing that people who really want his work are willing to pay for it. 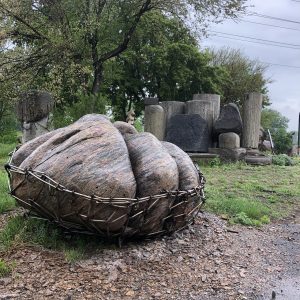 He tells a story about a developer who likes to use art in his buildings. When the developer claimed to have no money, Mojsilov told him to find an artist within his budget. “My work is worth the money.” The developer finally gave in. Zoran says he tells this story to young artists to encourage them to stand up for themselves and their work: “Don’t be desperate. Someone will want your work and you have to be patient.”

He has also traded art for other valuable services. In his mid-twenties living in Paris, he was having lots of dental issues. He developed a relationship with an art-loving dentist, and was able to trade art for dental work, an exchange that has led to a long-term relationship.

You treat him fair, he will treat you fair back. He drops the F-bomb frequently and describes himself as “hair on the tongue” – or “no filter.” Spar with him intellectually and with explicit epithets, I bet he will be your friend forever. 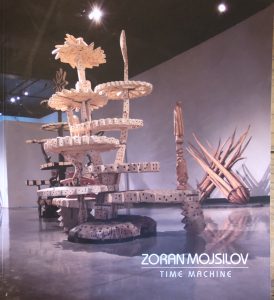 Time Machine, the catalogue of Zoran’s show at the Plains Art Museum in Fargo, North Dakota, (November 8, 2018 – May 25, 2019), chronicles Mojsilov’s life achievements. (Go down to his studio and ask him about his book, he might offer you a copy. Bring some good bread or beer you will be sure to get one.) Having been born in Yugoslavia (now Serbia) and growing up in a communist/socialist country, he had only the basics of life. He knew little about art but art was all around him—in Europe with its remnants of the Roman Empire, in the Silk Road architecture and art. He surmised that these surroundings sent subliminal messages to his mind.

Quality is important to Zoran, both in his work and in everyday life. Why don’t Americans seem to respect or value artists the way Europeans do? Zoran argued that America’s capitalistic society tends to devalue artists because we focus on price, not quality or the experience of art. Comparing art to the pleasures of great food, Zoran pointed out that after World War II, America went to canned food while Europe stayed with farm to table. In America the emphasis is on cheap food and being able to “eat in your car.”

Zoran Mojsilov has created a huge body of work, spread throughout the Twin Cities and beyond, many of his sculptures right here in Northeast Minneapolis. Though no two pieces are the same, his distinctive style is easily recognizable. He, too, is a distinctive personality, someone worth time to experience; a “one-of-a-kind” artisan.