Adapted from the newsletter of Eat My Words Bookstore

This collection of books comes mainly from the depths of an old friend’s uncle’s house. From deep within the basement, shrouded in dust, these writings are about the colossal failure and small successes of the American Reconstruction Era. Titles such as An American Crisis, From Blood Shirt to Full Dinner Pail, and The Avenger Takes His Place all have an ominous ring to them. I don’t remember much about the Reconstruction Era from history class; the lessons were geared more towards the Civil War years, not the time that followed. But the problem is that the civil and economic fallout from the Reconstruction Era was long-lasting. 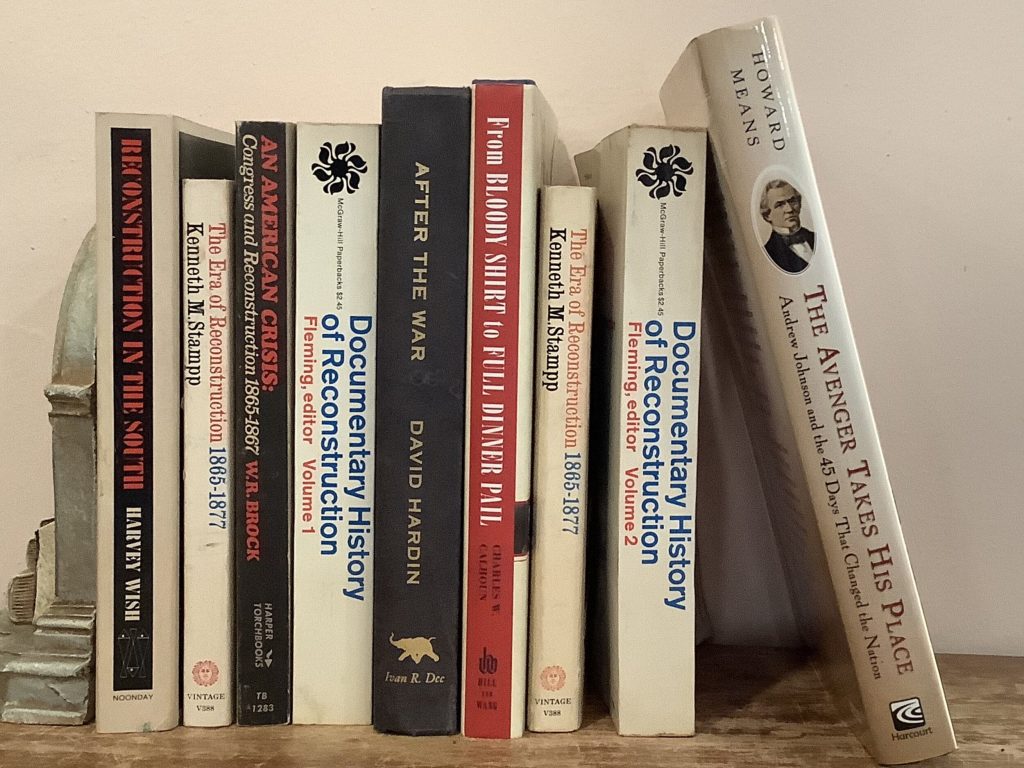 The Reconstruction Era was a time of lawmaking, of democracy, of empowerment. Northerners were ready to punish the Southerners, and to start finding a solution for newly-freed slaves. Reconstruction looked to rectify the winnings and great repercussions, in lives and money, of the Civil War. Black men got to vote; some were even elected into office in the new southern military states. Famously, Congress overturned a Presidential veto for the first time ever with the Civil Rights Bills, which instated the 14th and 15th amendments.

But in spite of all its idealism, radical reconstruction very quickly began to fail. The realities of the economy quickly overtook the need to give African-Americans a real shot at participating in the American Dream. Racist laws were quickly put into place to limit the mobility, economic and civic, of Black people; these laws would later be fought against in the Civil Rights movement. The country saw the rise of the KKK and many blatant acts of violence towards Black communities. But liberals in the North were ready to move on. Their interest in advocating for Black people gave way to their need to handle the government. It seemed too hard to make another group of people truly equal, so they left them behind, even after such a bloody and costly war. The lesson to be learned from Reconstruction seems to be that in order to really be free in America, you have to be able to participate in capitalism. And as the country fell into another recession, Reconstruction and its ideals fell away, once again prioritizing money over people. The country moved on from a terrible war with a country barely glued back together.

History buffs always have an affinity for a particular era—WWII, The American Revolution, or The Civil War. Eras that have been written about time and time again, recreated in fictionalized accounts and movies. These famous historical eras have been iconized and immortalized. History, as a genre, serves as our record, a living testament. But history, and its accounts, can be testy subjects. Who writes history? We know, as logical and smart people, that we can’t write about everything, something gets left behind in order to construct a linear and compelling narrative. History has implicit bias; often American history is rewritten to ignore the country’s failure. And maybe that’s what history buffs are getting right. By reading a bunch of different books, watching every documentary, visiting every museum—the cracks and fissures in our narratives can start to crack. It starts to show us, as readers and life-long learners, that the responsibility falls on us to teach ourselves what we were never taught before.

There is drama and excitement in the Reconstruction Era. There is darkness and unhealed collective wounds, too. It is not an era to be forgotten about; its impact shows that it deserves more investigation. Short-lived presidencies, radically good and bad laws passed— these may not be the things of movies but possibly of some good reading.

Heads Up – Grants for Businesses with No Employees Coming Soon!