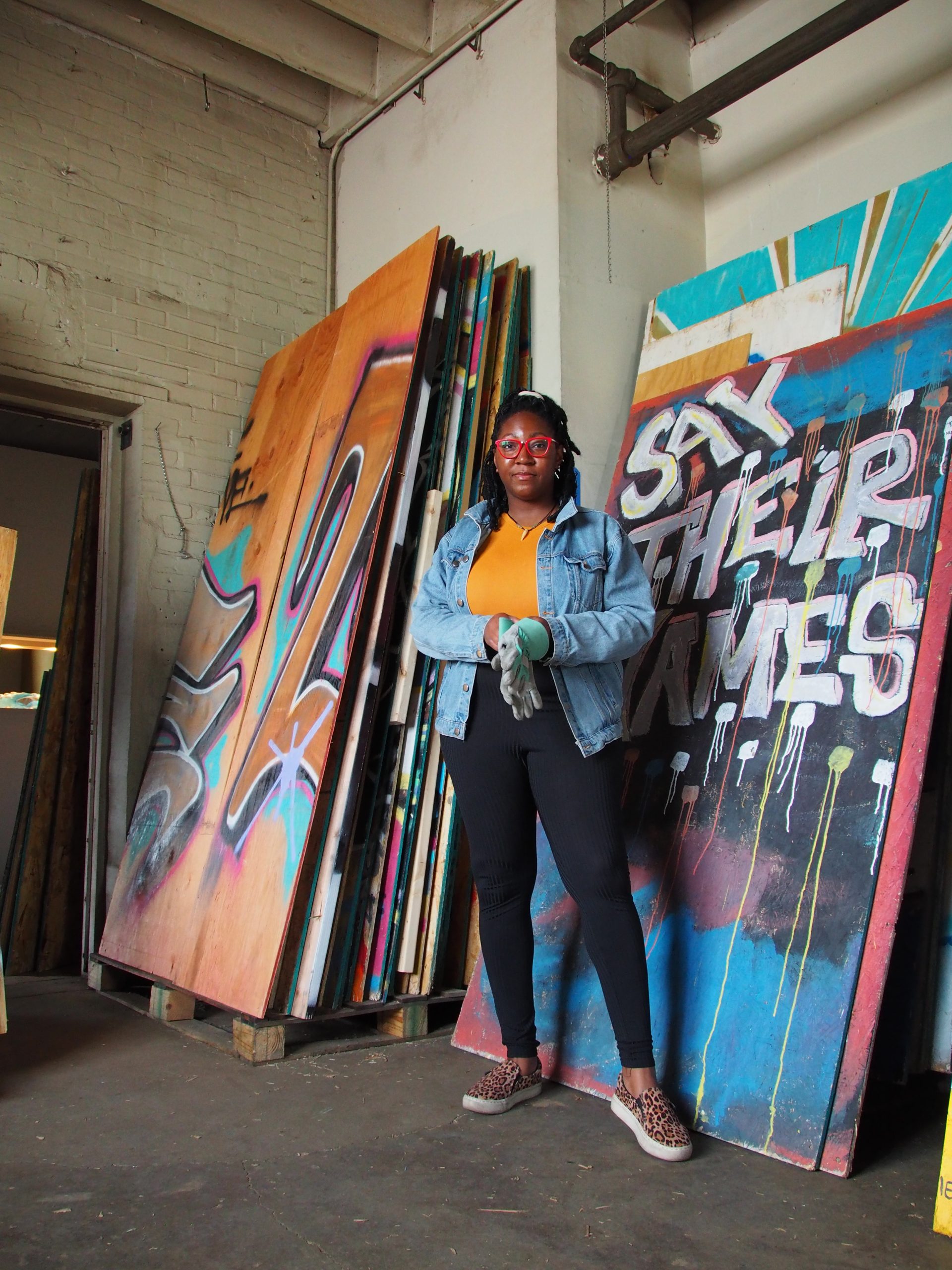 Her dream, and that of allies who helped collect what is now about 850 sheets of painted plywood stored in a small far corner of the Northrup King Building, is that there will be a large permanent space where the boards can be accessible for people to “sit with and absorb” and think about the messages of the moment. Community exhibit events like one they held at Phelps Park on May 22, near the anniversary of Floyd’s death, take a lot of heavy hauling and expose the ephemeral boards to damage.

How did that event go? “People said it was too white,” she blurted out, explaining she’s from Chicago where they don’t hold back. “Perhaps a lot of black people thought it would re-traumatize them and decided not to go.” There was a “vibe check” at the entry points setting the tone (see sidebar). The mixed response was somewhat expected, Kelly said, but in it she found validation. “When we first started, I wondered ‘do people really want me to be doing this?’ and now I believe the answer is yes.”

Kelly’s background is with the group Global Shapers, an initiative of the World Economic Forum, whose local members helped with the initial gathering of boards. Anything curatorial or artistic has been learned on the fly, taught by volunteers who work in the field. “Who knew to take museum studies?” As we walked and talked through the halls of Northrup King Building, various arts outside the closed studio doors caught her eye, from her friend Beverly Tipton Hammond to MB – Michelle Bruesegaard, to the spiderwebs at the ceilings and an A-frame cart on wheels.

The Northeast Minneapolis Arts District wasn’t a deliberate choice, Kelly said, it just happened that Artspace, Northrup King Building’s owner, was willing to lease to MTM for what they were able to pay. The irony of landing here (where for a long time and for many people diversity was fine as long as the skin color is white) is not lost on her. “Someone’s got to do that work. If black people aren’t here, black people won’t come.” She moved to the Twin Cities in 2017 and found it was “culture shock” to realize that there are still a lot of spaces that are not at all diverse.

The MTM spaces at Northrup King Building are closed to the public and are just for storage, staging, the repair, stabilizing and cataloging underway. It’s like big decks of cards standing on end. It is hoped to have the entire collection photographed and posted online by the end of the year. For more information or to donate toward the future, go to      https://www.memorializethemovement.com/