Our society has had many years of difficult political conversations. What is right and wrong? How do we solve problems? How do our choices in policy affect those we don’t know or understand?

A popular way for the public to digest complicated political conversations is the political cartoon featured in newspapers and social media. Steve Sack, an artist who used to have a studio in the Northrup King Building, is one of the most recognizable political cartoonists in Minnesota. There are many other artists who have been using this artistic channel to make sense of current moments by expressing their anger, frustration, and confusion on social and financial equity.  Through humor, sharp criticism, and use of symbols many people recognize put into context, they can cut to the point.

Profiled here are three artists out of many in the Arts District who have been exploring this language of political reflection in graphic terms on paper. Coincidentally, all three work out of the Casket Arts Building.

Labor Camp Project
Piotr Szyhalski was born in Poland in 1967 and grew up surrounded by Communist propaganda and cultural posters with dual meanings. Szyhalski, a professor at Minneapolis College of Art and Design, says Poland is in many ways different than America. In Poland, it felt like all the people were treated the same. It was clear the Communist party was the enemy. The US is more complex.

The COVID-19 pandemic and 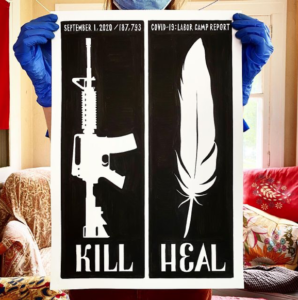 the killing of George Floyd reinforced  to Szyhalski how tragically similar the two were. He felt he was going back to Poland and the Communist party from the 1980s. Empty store shelves in America were mind bending. That was the experience in Poland. The fact that martial law is being discussed in America is “absurd and tragic. How intensely political,” he said.

For Casket Arts Building artist Szyhalski, the year was like everyone else’s, quarantined in his home with his family. A few days after the pandemic started, the seed was planted. He had a makeshift basement studio with ink, brush and leftover paper, from which he created a statement reminiscent of the cultural posters Piotr had grown up with.

He posted his first creation on social media and started getting responses. So he made another one. More conversations happened. Szyhalski wanted to have conversations as a way to connect. He found seven pieces of paper and worked on those, then thought that would be all. But others wanted more. He didn’t plan for this daily routine but with each post he received an ever growing response on social media. People reached out to him personally. Talking for sometimes hours daily to people, he responded to any post or comment. At the beginning of the project he had 2,000 followers and now has over 13,000. 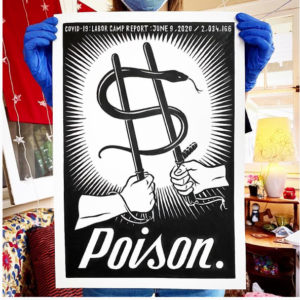 Szyhalski says he had a big chip on his shoulder about political art. Propaganda’s objective is to change people’s minds. He said his drawings are not meant to change your mind. He is just reporting on the situation. Defining art as political tends to flatten and reduce it to the black and white language of politics. “I want to work around that language, not the black and white thinking. I am interested in politics like landscape artists are interested in landscapes.” The landscape, such as it is these days, is saturated with this demolished idea of truth or fact, he said. “We are craving for some sense of earnest connection. I needed to be sure, on my end, that that is present in the work. Szyhalski says he refuses to be pigeonholed into political art. “I focus on the grey spaces, not on the black and white.”

When, in late May, George Floyd died after a police officer knelt on his neck for nearly nine minutes, Szyhalski sat with it. “I kept thinking: How do these things connect?” George Floyd and the pandemic were intertwined. Szyhalski said “The pandemic made us confront our mortality in a much different way. It helped prepare us to face the complexities brought out by the killing of Geoge Floyd.”

His body of work was a diary of 2020 with 225 drawings. The shared experience was profound. Artists have the responsibility to try to make sense of reality. Especially in difficult times.”

Szyhalski’s work was featured in the New York Times, The Star Tribune wrote a front page article in the arts and culture section and named his project to their Top 20 art of 2020. His new book We Are Working All the Time! will be released Wednesday, Jan. 6. More details of the project at  https://www.instagram.com/laborcamp/?hl=en

Russ White’s work comes from a totally different point of view but harnessing the similar language Piotr Szyhalski’s work portrays. White grew up in North Carolina and moved to Mississippi in his middle school years. His dad was a minister. White says he was acutely aware of privilege from several sources including working in a soup kitchen, as well as music, news, his schooling and upbringing. He became aware of power. Aware of inequalities of the world. White says he has always had an interest in morality and ethics.

Punk rock and hiphop gave him focus. Guns and Roses sounded angry but they were empty words to him. The Dead Kennedys had real anger about Ronald Reagan, hitting a real chord with him. As he moved through high school and college issues of inequity around homophobia, exploitation, and racism became bigger topics for him to draw and collage.

White has been exploring portraits as a main format for many years. From substituting real people for presidential faces on coins, portrait silhouettes, abstract deconstruction, collages, construction objects and locks all have a portrait point of view. His drawing and design skills are superb. To the casual viewer they are beautiful images but there is much more to every image he draws.

He says he is trying to find his own language. “It usually comes from a cerebral place. I start with a concept and go from there, although now I’m trying to rely more on the medium and my own intuition to guide the work.” His goal is to “stop explaining everything.” He is careful of how he is portraying others in portraits, being careful of not taking appropriations from them.

Russ’s newest work is studying whiteness. “Whiteness can be a mask, a lens, a blindfold, a hood. It can be a backyard just as easily as a panic room. A culture and a lack thereof; a history known but not to itself. It is often both a wound and a weapon. There is much left to unpack and unsettle. He writes, adding “and that is a process that white people in America need to undertake.”

“Unfortunately satire is a major victim of Trumpism.” White said it does not allow him to poke fun at the ridiculousness as he once did. His work is now more nuanced and subtle in the topics he works on. “I’m more interested in the power of art to ask questions right now than to give answers. For myself and my audience alike.”  Russ White’s work was featured at the MSP airport and in numerous gallery shows. He is the editor of MPLSART.com, where he will be having a discussion with Piotr Szyhalski on Wednesday, Jan. 6, 7 p.m.  for the release of Piotr’s new book We Are Working All the Time! You can see more of his work at  https://www.russ-white.com

Jeremy Lundquist
The other two artists had a much more graphic take on politics. Lundquist’s work focuses on the words themselves. Letters, textures, news and history are very intertwined with his work. He looks for text that speaks to him, what he sees going on in the world, first.  He likes mining the past. “I want the viewer’s picture of the world. Getting them to think about text more critically. Who dies in a war?  Who gets what? I am not trying to respond to what is happening right now, I am trying to make those connections historically.”

He is not making his own lettering, but edits some of the text he finds. “Something from 10 years ago or 100 years ago still resonates with me or means something different.” I am interested what is right in front of us or passes by quickly.” He wants his work to speak to the viewer as a textual image. “I think we take text for granted, maybe images too.”

In his work Beyond a Shadow of Doubt, quoting Colin Powell in the pretext of the Iraq war, the viewer sees those sentiments justifying war are just as relevant today and as back then. “The spread of Communism as an example is the same thing happening over and over.”

“Anger was a vehicle to drive to make the work. I am still pissed off. I am not willing to accept that it is what humans do,” Lundquist said. “I encourage people to see the world differently instead of accepting it as it is. Believing you can make a difference, then the act of doing it.”

Jeremy Lundquist is a Visiting Assistant Professor at MCAD and a printmaking instructor at the Perpich Center for Art Education. He has received a McKnight artist fellowship. https://jeremylundquist.com/home.html