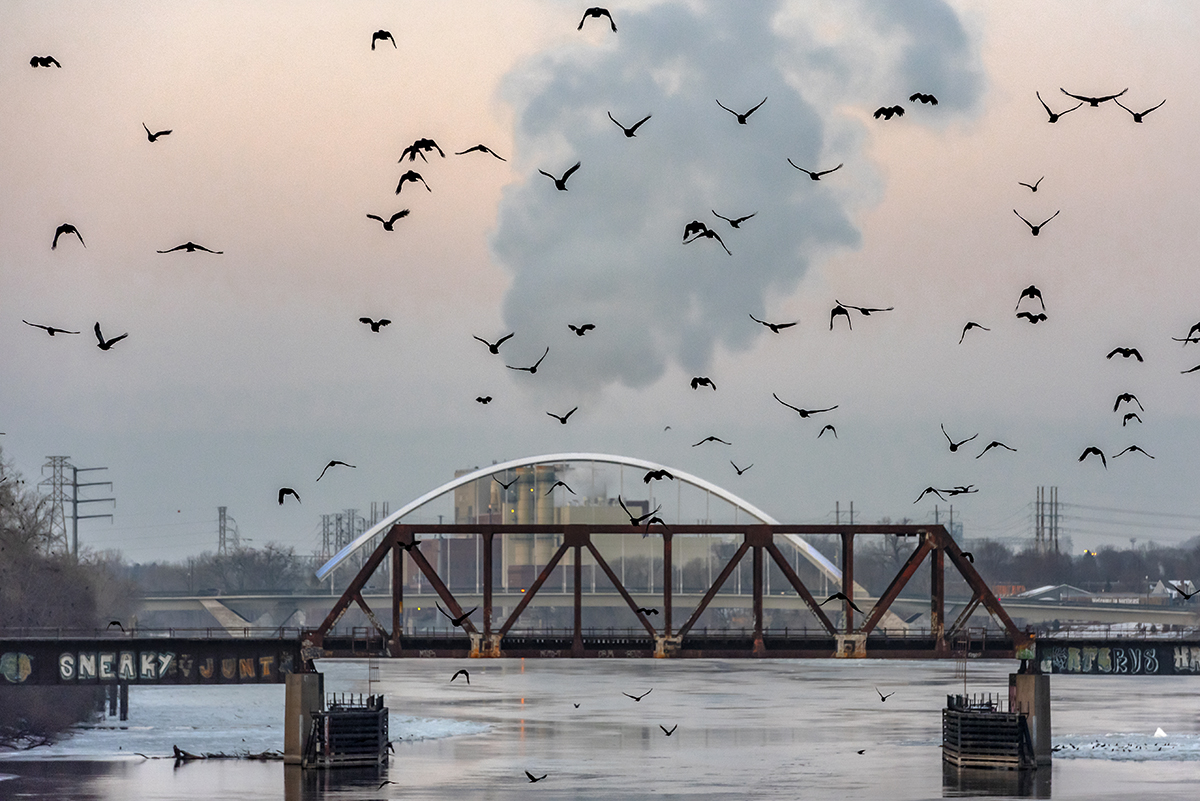 We are not the only creatures with daily rituals of passage.

Every winter in the Minneapolis-St. Paul metro area, in the late afternoon, flocks of crows gather by the hundreds in the neighborhoods, staging for their flight to a central roost at dusk.

They often congregate where there is food and water, snacking on the hackberry trees, resting on the river ice, maybe capitalizing on the leftovers from an eagle’s kill. Then they stream past city landmarks and the downtown skyline, often thousands upon thousands converging from all directions. With much cawing and aerial chaos, the murder (another name for a flock of crows) will somehow collectively decide which trees and rooftops will be their resting place for the night.

Where they end up varies from week to week, sometimes day to day, and even changes during the course of an evening.

These crows had gathered in the Northeast neighborhoods, spent late afternoon on the river ice and the in the trees on the bank, and then in waves took flight toward South Minneapolis where they spent that night. 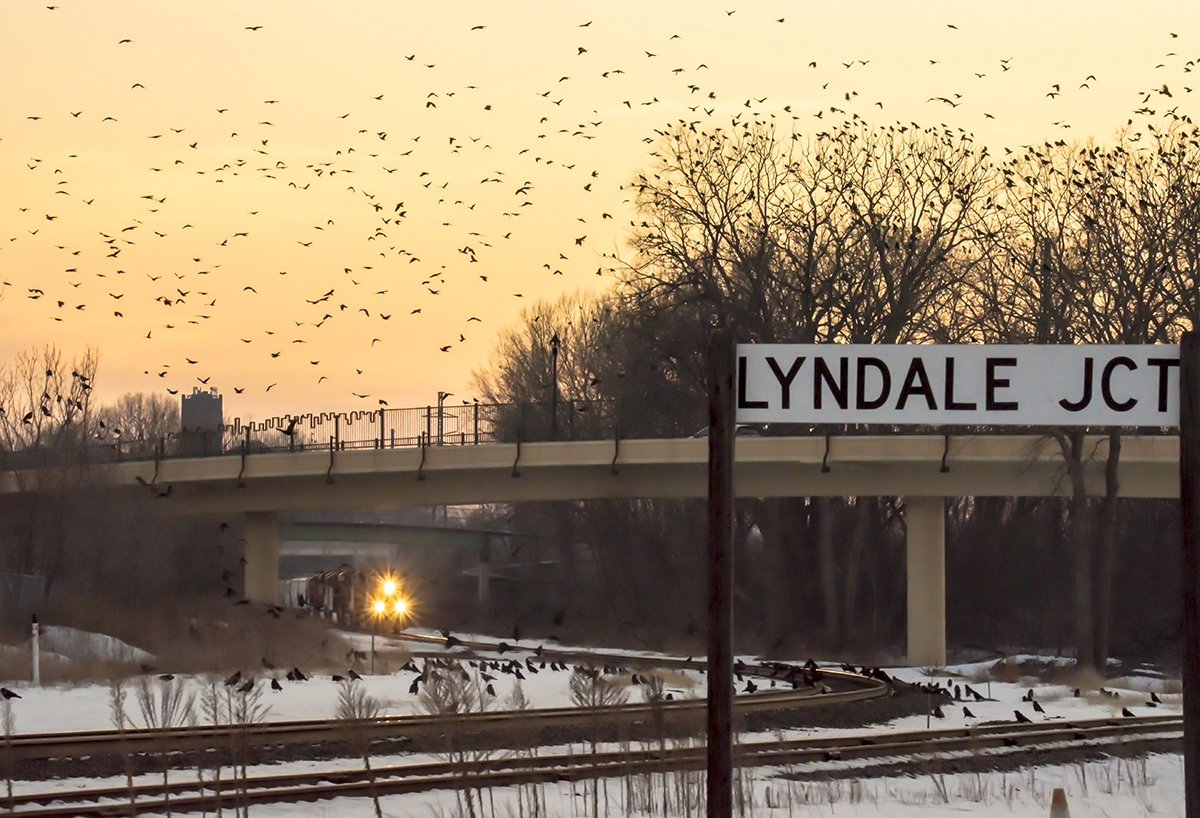 This photo was made near the Minneapolis Impound Lot. The crows pictured were among thousands that filled the trees, covered the sandpiles in the public works yard across the tracks, and perched on buildings, fences, and construction equipment. A little farther away, I could see swarms of them flying near the cathedral. 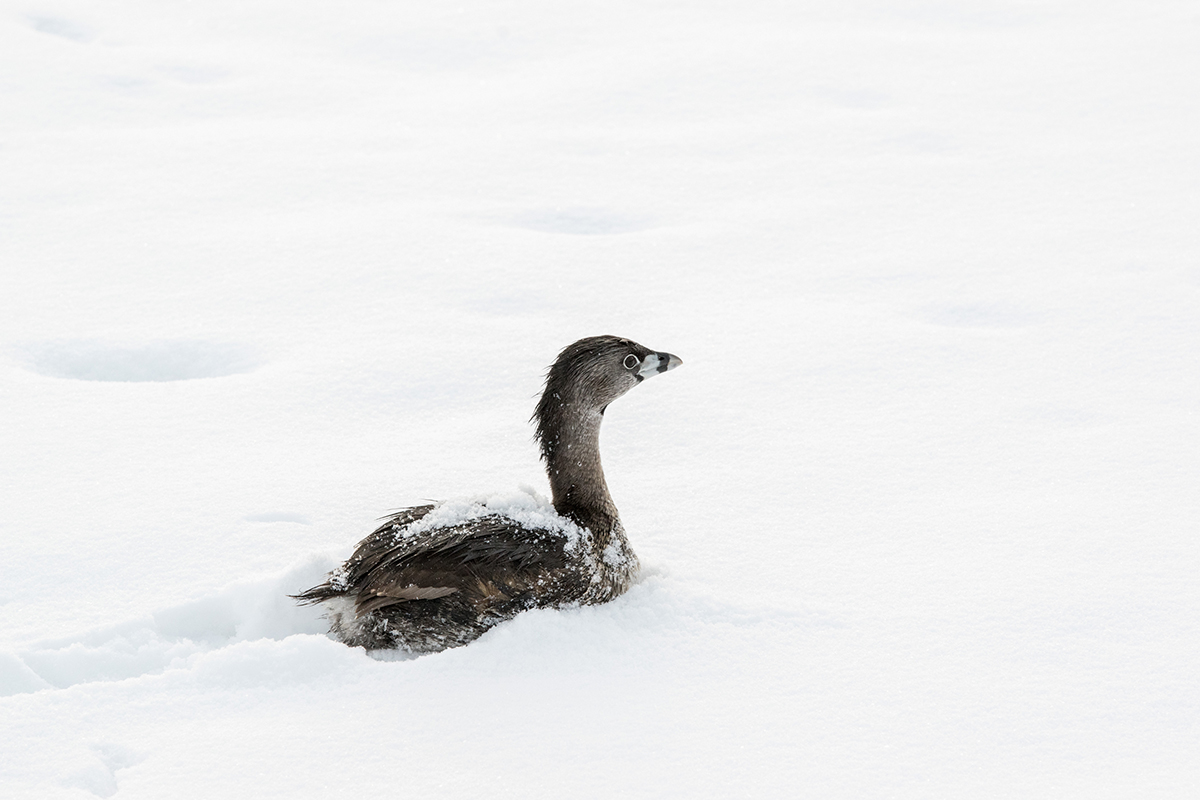 We aren’t the only creatures for whom migrations can be exhausting and, sometimes, treacherous.

Migrating birds often have thousands of miles to cover, and can become confused and disoriented when weather, winds, and temperatures change. This grebe was flying frantically in circles at Boom Island Park in early April, so fast that I couldn’t ID it in flight. It suddenly slowed, wobbled,  then crash landed right in front of me.  It sat motionless, eyes closed for long enough that I was sure I would be calling the Wildlife Rehabilitation Center. (Grebes belong in the water, and, like loons,  because of their heavy bodies and feet positioned far back, they can’t take off from land.) Then it suddenly roused and ran, upright, wings outstretched for balance, to the river. It slid in, swam very fast in a circle a few times, then dove a couple times, eventually coming up with food.  I learned from the Wildlife Rehabilitation Center that when there’s snow cover, tired, migrating grebes sometimes are disoriented by city streets, mistaking dark pavement for water, and and they injure their breastbones when they land. This one fortunately ran out of steam above a snow-covered field, which cushioned its landing.