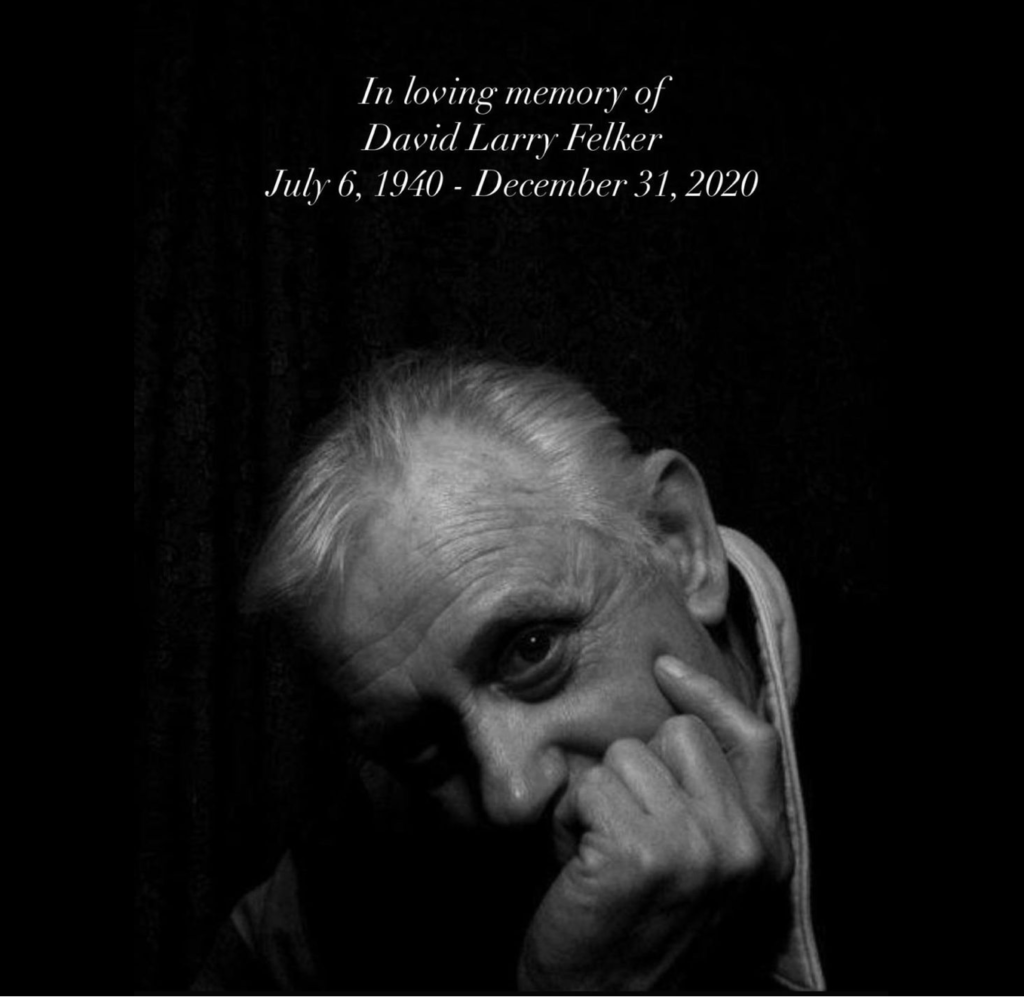 when you write a poem for someone that’s left us,
someone that’s passed on, you’re always looking
for a doorway in, a passage towards something deeper,
something significant, something that touches the soul.

my door to dave was his sweetness.

now i know that i just wrote about how sweet charlie
thysell was, and he was one beautiful man, but damn,
dave felker was such a sweet man too. i guess i’m just
blessed with the sweetest of friends.

so this story starts back in the nineties somewhere
when i met dave and he saw my work and gave me a
solo show at his “International Gallery of Contemporary
Art” in the thorp building, god knows why. it was my
first solo show and we installed the work and it looked
good in his gallery and then it got the “A List” in the
calendar section of “city pages” and then we had a great
opening and lots of folks came and maybe even we sold
some art, i’m not sure, but the whole thing sure sold me
on dave.

so we started hanging out.

and that way i heard about his life in alaska before he
came to minnesota, which i found amusing cause who woulda
thought that alaska had an art scene, but what do i know.
and then i discovered that dave was over the top optimistic
about the arts and i was not, having been beat down into
that less than optimistic cynicism that is rife in the cultural
realms. all cause i was tired of little to no sales, little to no
recognition from the museums in town, and the continual
cops busting exhibits/bands/parties in northeast cause we
were the new riff raff and go back to where you came from.
but dave, mr. optimism, had this idea about a northeast-wide
art crawl and i thought it was a bad idea and that he was
nuts, but he sweet talked me out of my art dungeon and into his
world of love and light and somehow i got to thinking he had
a great idea and so we gathered whatever art friends we

could muster and he donated an ongoing meeting space and
wham not even two months later art-a-whirl/nemaa was up
and running. but we had money problems, our eyes on getting
bands for our parties and maybe some buses to get patrons around
the rather scene, get them from building to building, from studio
to studio. so dave, always mr. positive with this art stuff, dave
said why don’t we talk to our councilmanwalt dziedzic and i said
that’s a horrible idea cause he was an ex-cop but dave went and
saw him and sweet talked and the next thing you know walt’s the
artist’s best friend and art-a-whirl’s big patron and thus, in like two
days we have 20 grand to move forward and make things happen
and that’s what we did.

besides, a different time when my wife and i were down and out a
bit on the whole money thing and staying at my mother’s place in
the burbs while she was snowbirding for the winter, our pup stella
pretty much killed her prize danish modern dining room chair,
gnawed the leg almost all the way thru, but we brought that baby
over to dave the magician craftsman and his back of the gallery
refinishing biz and he healed it in a month just like mint and you
couldn’t see a sign of our dog’s dasterdly deed and suddenly i was
off the hook with mom and she never did need to know and life
could just go on.

but my god, I didn’t mention dave’s wonderfully strange art in this
poem, I didn’t mention lois and the kids, I didn’t talk about all the
other things he did for folks and I didn’t talk about all the darkness
and suffering he carried with him, we could talk about all that
some other time if you want, maybe late at night at the bar.
but i just say god bless dave felker for who he was, is, will be, bless
him on his journey, may it be filled with love and light and o god i
do hope to see him again someday soon enough and then we can
hang again and i’m sure he’ll talk me into doing more good stuff
and that’s alright by me.

Communities reflect themselves in public art