According to 250 community members who responded to the Northeaster online survey conducted May 6 to June 15, local arts ranked high among things to do. 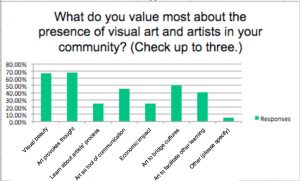 The most popular entertainment venues visited in the previous twelve months were movie theaters (74%), bars and clubs (65%) for Northeaster readers surveyed, followed closely by live performing arts and art museums (64% each). More than half (54%) reported visiting one or more art studios. A variety of other activities were offered, including attending charity events, which scored 47%.

Asked what they intend to do post-COVID-19 in the next twelve months, all percentages were off at least slightly, with many pointing out that COVID-19 might still be around in twelve months. Bars, clubs, movie theaters, charity events and live music saw the biggest decreases in intent to attend. The survey asked “what do you value most about the presence of visual art and artists in your community?” “Art provokes thought” at 68% and “Visual beauty” at 67% were the top two answers, followed by “Art to bridge cultures” at 50% and “Art as tool of communication” at 45%. “Art to facilitate other learning” came in at 40%. Economic impact and learning about artists’ process scored 24.5% each.

Prompted by ads in the Northeaster, Facebook postings, and flyers distributed to randomly-selected blocks in all Northeast neighborhoods, Columbia Heights, and St. Anthony, respondents were predominantly female (77%). That is typical for the format, according to the Circulation Verification Council which hosted the survey.

Give to the Max Day