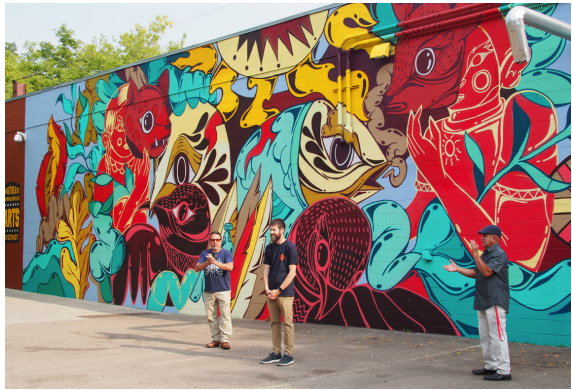 Artists Gustavo Lira  and Victor Yepez stood with Solar Arts Building manager Mike Schardin prior to cutting a ribbon for the mural, Solar Arts Fauna, that graces the back of the Solar Arts Building at 711 15th Ave. NE. They described it as meant for community members of all ages to enjoy. Rodrigo Oñate, also known as Roco Drilo, designed the piece and executed it with the help of assistant Joshe Montaño, Lira and Yepez. He became friends with them during Art-A-Whirl® shows when first starting his career, selling out most of his pieces. (Photo by Margo Ashmore)

Onate, now known worldwide and living in Mexico, was in town to do another mural on Lake Street, and demonstrated spray paint techniques that make the process go quickly, taking less than a week. The Solar Arts Building commissioned the mural, and held the gathering on August 5, a First Thursday when the building’s second floor is open to the public for studio visits. It was also the first opening for Art to Change the World, which is sharing a studio at the building and displaying members’ work in what’s known as the Fox Den. 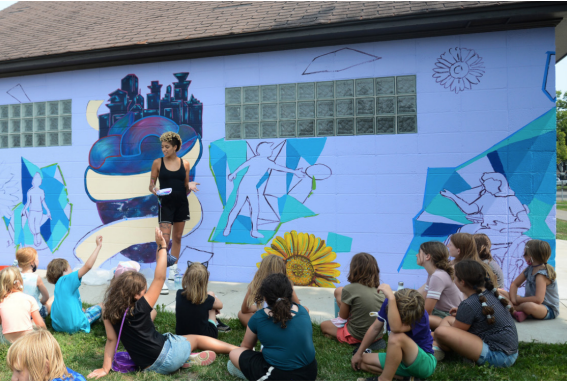 Creatives After Curfew, a project of Public Functionary based in the Northrup King Building, have been interacting with people in the Northeast Park neighborhood to develop a mural on a park maintenance building. (Photo above courtesy of Northeast Park Neighborhood Association, which funded the activity).

Numerous murals have sprung up on building sides of all sorts throughout the Arts District and Northeast.

Among the most recent, bright flowers and butterflies on the Washington Street side of the Holland Arts East building at 22nd Avenue.

Weigh in on creating a new Arts Office for Minneapolis