Art has been front and center throughout the past year responding to the pandemic and the murder of George Floyd by Minneapolis police officer Derek Chauvin. Art throughout history has always been a powerful medium for society to understand complicated and difficult situations. For reference, two artists who documented their societies’ indifferences and brutality were Francis Goya of Spain 1746 -1828 and American Gordon Parks, 1912 -2006. 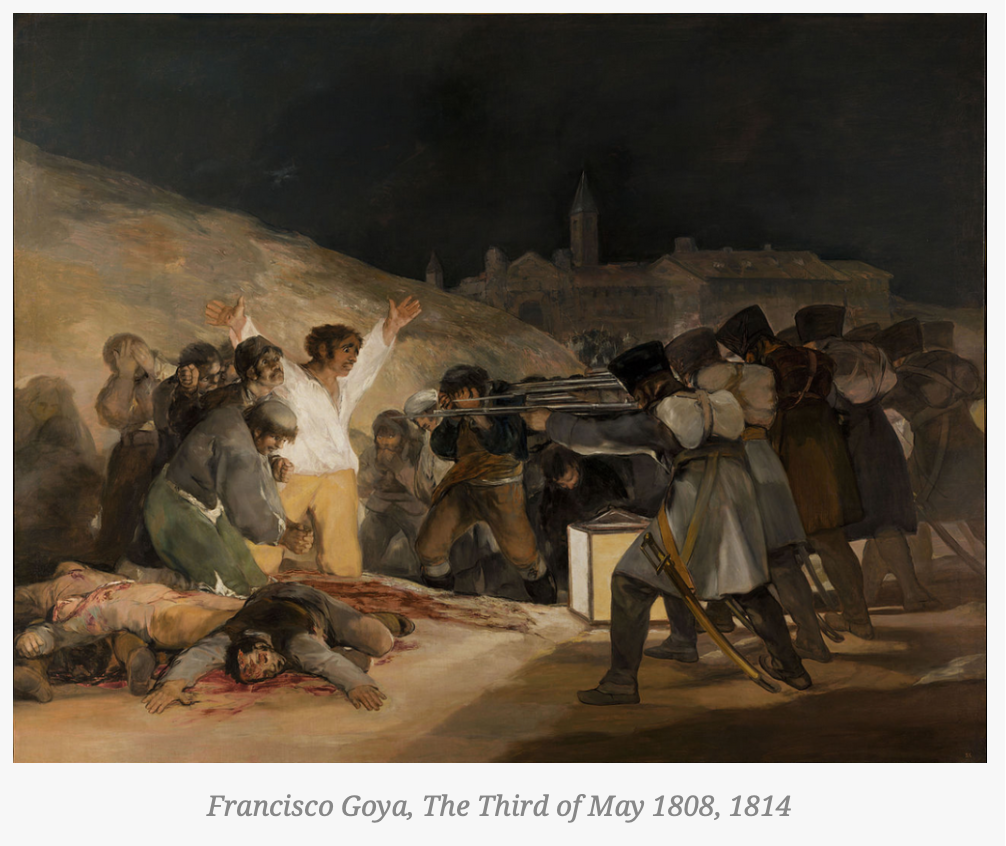 Francis Goya’s “Third of May 1808” painting depicted “French soldiers aiming their guns at a Spanish man, who stretches out his arms in submission both to the men and to his fate. A country hill behind him takes the place of an executioner’s wall. A pile of dead bodies lies at his feet, streaming blood. To his other side, a line of Spanish rebels stretches endlessly into the landscape. They cover their eyes to avoid watching the death that they know awaits them. The city and civilization is far behind them. Even a monk, bowed in prayer, will soon be among the dead.” [quote from https://kiamaartgallery.wordpress.com/2015/04/17/romanticism-francisco-goya-the-third-of-may-1808-1814/ ]

Gordon Parks influenced social justice through his photography from 1940 to the 2000s.

“Gordon Parks, one of the greatest photographers of the twentieth century, was a humanitarian with a deep commitment to social justice. He left behind an exceptional body of work that documents American life and culture from the early 1940s into the 2000s, with a focus on race relations, poverty, civil rights, and urban life. Parks was also a distinguished composer, author, and filmmaker who interacted with many of the leading people of his era—from politicians and artists to athletes and other celebrities.” [From  https://www.gordonparksfoundation.org/gordon-parks/biography

Currently, many artists in the Arts District have channeled consciously or subconsciously with these and other figures from art history to symbolize place, time, and voice. Peyton Scott Russell, Leslie Barlow, their associates and others have reached international audiences with their work.

Art has a special power to expose injustice, galvanize and catalyze emotion into change.

To see 1,696 pieces of social justice art made in Minneapolis and through out the country, 1696 made in all go to George Floyd & Anti-Racist Street Art

“Justice for George: Messages from the People,” an exhibit of some of the 2020 mural art that was saved, will be at Phelps Park May 21-23. Register to attend here.

Holiday Art Events in the District

Notes Around the Arts District

Northeaster awarded for arts and more